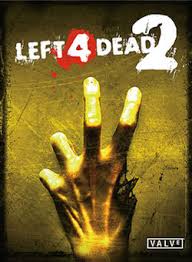 The game is about 4 people, Rochelle, Coach, Nick, and Ellis. During the game, you have to go through multiple campaigns and kill infected people ( zombies )

There are,
Spoiler! :
Dead Center
The Passing
Dark Carnival
Swamp Fever
Hard Rain
The Parish
The Passing
The Sacrifice, includes No Mercy

In the Sacrifice and No Mercy, you are the characters from Left 4 Dead 1.

In this game, you must do some challenges to survive. Like in Dead Center, you must get 13 gas tanks scattered around the mall, to fill the car and escape. And in Dark Carnival, when you need to go through the roller coaster to get to the safe house. Each campaign holds a new task.

There are health packs, defibrillators, pain pills and adrenaline shots. Every character gets a flashlight.
Usually you can find items scattered around to use to defend yourself. Like an axe, pan, katana, guitar, etc. But they also have shotguns, assault rifles, sub-machine guns and sniper rifles.

You can also get special ammunition. Like fire ammo and explosive ammo. There are pipe bombs, which attract zombies to it. Boomer bile, which they are also attracted to. There's also molotovs .

Every character also gets 1 pistol as a secondary, which, if you find another one, you get dual wield. There are also magnums. But you only get one to keep. Unlike the starting pistols. Pistols also get unlimited ammo!

There are also some special infected you meet across the way. like jockeys, spitters, hunters, boomers, chargers, and smokers. Those are easy to kill. There are witches, which you don't want to startle. They have pink hair and almost no clothes. When you hear a cry, turn off your flashlights and don't shoot nearby zombies. Try to sneak around her. But if you startle her, she'll get you incapacitated. She's kinda-hard to kill. The hardest special infected to kill is a tank. They are really strong, and take pieces of the ground and throw them at you. You need all your teammates to help you kill a tank. Try not to let it hit you. It will keep on throwing/hitting you until your incapacitated.

In the game, they also have more modes than campaign. You can play survival, scavenge, realism, and more. There's also single player if you don't like to play co-op.

I hope I got you to try the game, or at least think about it. If not, I'll try harder next time. Bye!

Users browsing this forum: No registered users and 1 guest