I propose that as a community we build out a fancy train system to make traveling to points of interest. This would include towns, End Portals, even player bases. This system would be simple to use, navigate, Expendable and hopefully good looking.

Currently in my plan, there are five main stations. 1 station near spawn, and one station near each corner of the map. Ive made a fast mock-up of the approx. locations the stations would be placed. This is not precise, and not written in stone.

Stations in the North West, and South East corners of the map will have lines directly to the spawn station. They will also have direct lines to the corner stations that are not diagonal to them (2 in total).

Stations in the North East, and South West will only connect to other corner stations, because they will be fairly close to outposts which have a TP to spawn.

Cuboids should not extend from bedrock to sky. Only the space required to protect the tunnels from griefing. These Cuboids may be under server control once completed or under player control. Which ever ends up working better. This will mean that players should not be stopped from building/mining above the cuboids or below.

Rails will be built at a depth of 20. This is to avoid tunnels from hitting the diamond layer which may be actively mined by other players.

Each station will have one departure, and one return rail.

Each station will have selectable destinations.

Each station should be themed based off of the surrounding biome. Example: Sand Temple station in desert.

Each station will have a method of collecting minecarts, and dispensing them.

Each station will likely need one or more players that can check the station to ensure it has enough minecarts (Unless mods decide to make unlimited carts somehow).

I have a working prototype of the redstone work required to make each station work in vanilla.

This project will be a fairly large undertaking and as such will need multiple willing players, and plenty of resources for tracks/stations/redstone/ect. Due to the size of the project, I would like to get some willing Volunteers before going ahead with this project.

I also need anyone that wants a station to let me know so I can better plan how many connections each station may need now, and in the future.


TLDR: Building rail network, need people to help, and need people to tell me if they want a station at their town/station.
Opportunity knocks but once, Temptation leans on the door bell.

Sounds like a good proposal. I'll look at the details more later. Also happy to help out - both as a legit builder and with the regions.

As a side note, the spawn regions for magna are all created so that no one can build above them, but folks can still mine below them. In general, I chose the lowest block of the protected area to be 40 or above depending on the actual buildings (keeping a bit of space protected for downward additions).
--Tulonsae
Top

Awesome idea. If I could offer two suggestions, based on this screenshot: https://i.imgur.com/mh7sgTW.jpg

1. Maybe move the planned Northwest station to where I've placed the "yellow" star. That way you get a change of biomes (mesa, mesa station).

2. Aflycon has a plan to place a station at where the "blue" star is; it'll service the "Carthage" area we're building up. We would love to be a part of your network.
Top

@ Tulonsae - Good to know we can build under the spawn areas. I might plan to have boarding area closer to spawn/outposts seeing that there shouldn't be a conflict with regions. And thanks for the willing help

@Derigin - Good idea for the Northwest station. And I would be happy to connect the Carthage station up to the network.

I have finished moving most of my junk from Vildare to Magna. Only have a few smallish projects before I start working out some stuff for the rails. I have a few designs in my head for the tunnels but will have to make a couple prototypes before I decide. I want to make sure they both look good, are somewhat compact, and allow players to run through them. Just in case someone logs or disconnects its always nice to have a tunnel that is easy to run through.

EDIT: after looking over the map, I am debating weather or not to add an extra station between Northwest, and Southwest for the mushroom island. I can ether make septate lines that will go there (would double track needed) or just at a station where players will stop at on that part of the line for a few moments. If they want to get off they can, if not the cart will continue after a few seconds. Thoughts?
Opportunity knocks but once, Temptation leans on the door bell.

If you need help, I can supply a lot of rail/materials etc. I also wanna help build if you need more to dig the tunnels out.
Top

I'll be building these lines: 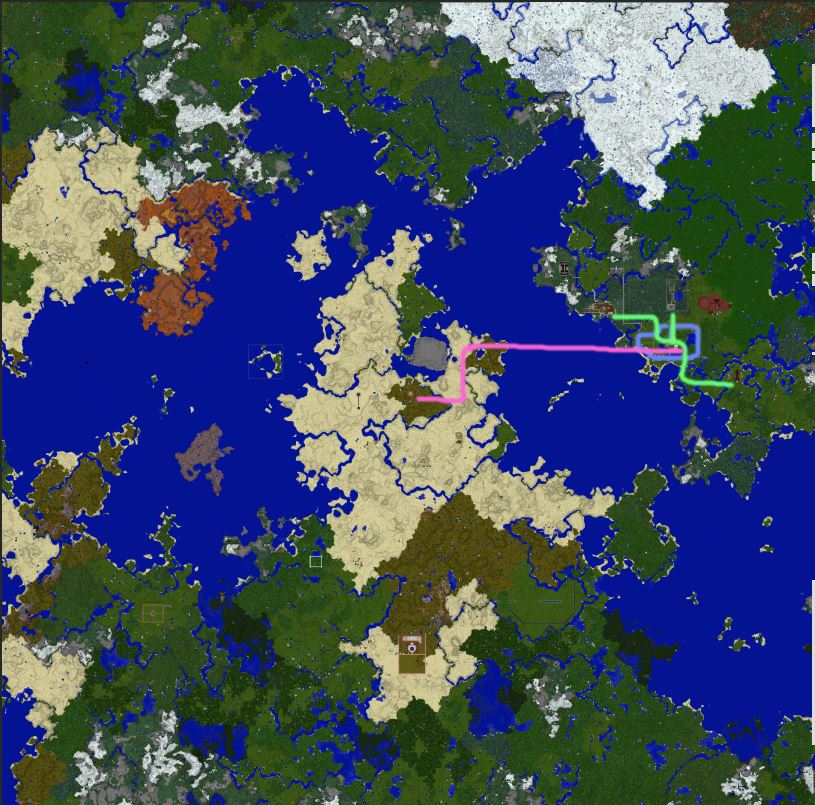 The blue line is under construction now. The green line will connect Carthage, Deltaria, Tindera, and Sti's place. Deltaria's Grand Station is the main station in the northwest, as it will house all three rail lines. I can handle the northeast, Tulonsae.

The bridge across the ocean is a work in progress right now (the span is built, so you can cross on foot, but nothing else is done yet). A rail line will be added.

ROFL I just noticed your profile pic dave. Is that a dancing Linus XD
Opportunity knocks but once, Temptation leans on the door bell.

The bridge across the ocean is built. Now need help with mats for rails and powered rails.

don't hesitate to ask me for iron, redstone, or gold if you need it to make rails. i have way too much and i'd be happy to share
Top

You built a bridge on top of the water without allowing access for boats? You sir, are scum.
Top

I thought the same thing, it looks that way from the picture. It's actually a few blocks above sea level; I checked in game.
Top

There are a few points where the bottom part goes up allowing for boats.

It still should have been underground. :-p
Top

If boats become a real problem, then we might want to address that with some changes.
--Tulonsae
Top

Users browsing this forum: No registered users and 1 guest